27 FEB 2010
Sand Hill, Ft. Benning, GA, the birthplace of every Infantryman.  There are few institutions in the world, where a man can be taught to live by violence of action; that driving sense of purpose to follow the path of least resistance, to move-move-move, regardless of what waits for you on the other side.  The Infantry lives by violence of action, whether you’re assaulting a beachhead or making your bunk.  Typically, it’s something similar to the latter.  The life of the soldier is not an hour and a half, action packed adventure, starring Joe Hollywood all dressed up for blood, guts and glory.  The Drill Sergeants on Sand Hill inspire hard charging, let’s get it done, hurried movements; practically pushing you out of the barracks or foxhole or whatever, and then what?
The and then what will be the vast majority of every soldier’s career.  I imagine, of my eight years in service, I owe seven of them to and then what.  Sure, I played a moderate role in the invasion, but I can tell you, for every ambush I went on that ended by bombs and bullets, there were twenty more where the only opposition found were chilly nights, the want for sleep and giant spiders.  And the same can be said for every kicked in door or convoy patrol or any other soldier stuff.  The Army calls the and then what moments ‘hurry up and wait’.
This is where I find myself now, at hurry up and wait.  I am on the second chalk to Kuwait; we fly out tomorrow.  I have already packed my bags and cleaned the barracks and called my list of loved ones.  And I did all of this with such a sense of urgency, such violence of action, that the Brown Rounds from Sand Hill would smile with pride at their good little soldier.  Why proud, if all my scurrying around accomplished was a day or two of and then what, of hurry up and wait?  It’s conditioning, for that one time of twenty, where your target walks into the ambush or an armed silhouette appears in the doorway or the convoy takes fire.
With the current US operations in Iraq, and our assigned task, I imagine, I hope, the odds of one in twenty are actually far less.  I’d rather not relive 2003, and I cannot expect we will.  But still, the conditioning is there.  My father gave me sass a few years back, at some family gathering.  “Calm down”, he told me, “You would think that the Army would have taught you patience.”  I replied with, “No, the Army taught me the importance of meeting your time hacks.”
- The Exodus
Posted by The Exodus at 5:40 PM No comments:

24 FEB 2010
A year ago, when I left my fraternity brothers behind at ‘coolege’, after a very long and equally unproductive educational pilgrimage, my father told me not to fret, that I had socially graduated.  To what new level of social advance, I can only assume he thought my efforts towards drinking would shift focus to my unethical, and quite likely illegal, undergraduate essay ‘workshop’ business.  To his dismay, I will admit, a four-day pass to Austin proved that I am the same drunkard who has roamed the halls of various Florida University and College dormitories over the last eight years…
Saw a man dancing on a Grand at a piano bar.  Met six bikini waitresses who serve false hope.  Nigel threw up.  Bought food from a street vender and wore it for the rest of the night.  Walked into the wrong hotel—three times.  Flat Iron steak and a bottle of cabernet sauvignon.  Piano bar again, someone paid seventy dollars to hear the UF fight song.  Found the First Sergeant and got a free beer.  Ate at Katz’s deli, it was nothing like New York.  Bought clothes without food stains.  Played billiards and watched USA beat Canada.  Air hockey in a dingy bar.  Shots that taste like Tabasco.  There was a light-saber battle on a mechanical bull.  Hailed a cab to go four blocks.  Ribeye on the bone, a bottle from Stellenbosh, finished with a Port and felt snooty.  Barnhardt threw up, and then he bought false hope from a bikini waitress.  Took a body shot at Coyote Ugly’s, probably have herpes now.  After hours party at some hotel.  Drunkenly slurred directions, luckily our cabby spoke gibberish.  Snow in Texas, all fights cancelled.  Sign-in to base postponed.  The snow stops.  Sign-in is back on.  A last look through a Starbucks window of the slush filled streets, as I sipped on an espresso and tried to remember the last four days.
The grounds at Ft. Hood were still covered in snow when the taxi dropped us at the gate.  And I may have been drunk still, when we woke in the morning for a run.  As for my misadventures my father had hoped I left behind, it seems more likely that I’ve merely deferred my actions for the deployment, and I’ll reinstall my payments into sophomoric behavior as soon as I get home.
- The Exodus
Posted by The Exodus at 5:33 PM No comments:

And it finally begins...(read posts below)

Expect the next five or so entries to be somewhat out of order and not chronological. It took us some time to make sure we could legally do this blog without getting anybody in trouble. Once we get over-seas this bad boy should be updated regularly.
Below this post are two posts you should read, then we will start posting above this entry.
- The Exodus
Posted by The Exodus at 7:11 PM 4 comments:

My last training mission has ended.  The remainder of our Ft. Hood experience will be cleaning and packing.  I remember my last mobilization; we must have re-packed our gear a few dozen times, each time with some tiny detail added or excluded.  Have four socks in your rucksack, six in your A-bag.  No, make it five and five.  And on the tarmac too, waiting for our bird, the bags were dumped and packed again with little piles of personal items left behind to be lost forever.  The Army calls this Reindeer games.
The Army plays a lot of Reindeer games.  Eight trucks my platoon washed for turn-in today will be driven on tank trails tomorrow.  Dirtied again and cleaned again.  A four-day pass requires counseling, a risk assessment and contact information.  Each day these papers are reformatted and filled out again.  I think of the movie Groundhog Day and I want to play the piano and rob an armored car and get the girl.
In the haze of Reindeer games, there are tricks to keeping your sanity.  A long distance runner will find objectives along the way to run towards, goals to achieve to break the monotony of the trek.  Surrounded by Reindeer games, we beat down monotony with our own goals, our own little moments of happiness to race towards.  I’m racing towards four days and nights in Austin.  Four days of medium rare ribeyes and tall glasses of Jameson, putting my gut and liver at peace one last time before I see the desert again.
And after I’ve run to Austin and my trek puts those days and nights behind me, I’ll look forward to another, and the Reindeer games will pass by like mile markers on the road to something better.  Jumping through flaming hoops to find boat drinks and sunsets and Rockette girls on the other side.
- The Exodus
Posted by The Exodus at 4:51 PM No comments:

04FEB2010
Along with half of my platoon, I have bronchitis. If you have no military experience, surely you’ve heard some random hero in some random war flick say, “If it ain’t raining, we ain’t training”. It’s true. From now on, ignore the weather channel. If you want to know if it will rain on your wedding day, call the nearest Army post and ask if any Infantrymen have a training exercise that day. Normal people label this irony Murphy’s Law, but out here, we call it Private Murphy’s Law. And Private Murphy is always there—omnipresent. For three days in the rear we had adorable weather; San Diego weather; mid-70’s, no cloud in the sky weather. The morning we woke for a five-day field problem, the rain was making mini ice rinks here and there. I imagine mini Private Murphy rolling around the mini rinks on a mini zamboni.
Out there in the field with the mini zamboni, fueled by irony, we practiced soldier stuff. We practiced convoy security, practiced occupying a battle position, urban operations, and firing our mounted weapons while on the move. The last of these was the only fun found that week. And that fun, as always with the Army, was a controlled fun. An observer sat up there with our gunner and said, “shoot here but not there”, “are you sure you know what you’re doing”, “shoot”, “don’t shoot”, and so on. I imagine a Nun with a ruler, jabbering on about piety while smacking away at children’s wrists, where piety is really fire control and smacking away at wrists is really smacking away at wrists.
Between each wrist smack, our gunners would fire a burst of 7.62 or .50 cal rounds down range towards the enemy—those little green plastic men. If Martians hold true to stereotype threat, the Army is well prepared for their arrival. But for each crew, the Martian slaughter only lasted an hour. The remainder of the day I sat at the ammo point, coughing up a lung and handing out bullets. Little bullets covered in my sickness. I think of small pox covered blankets. And I wonder if one day green plastic men won’t have to pay taxes.
- The Exodus 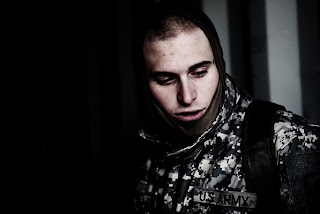 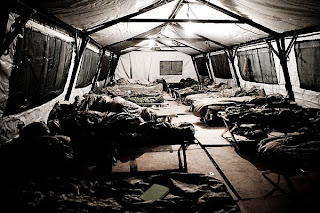 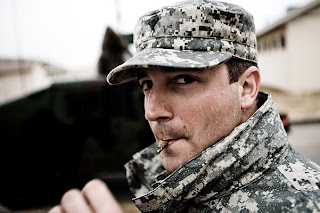 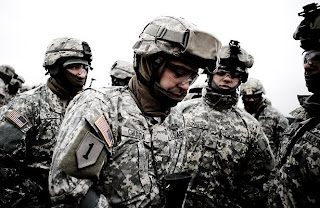 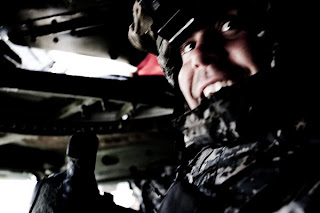 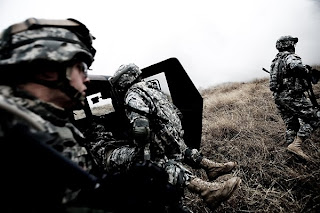 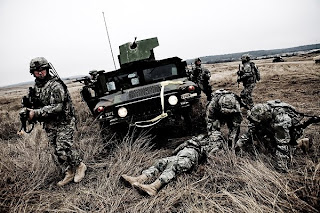 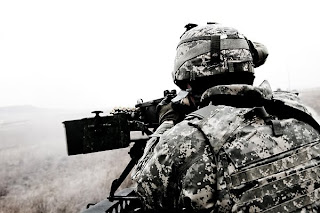 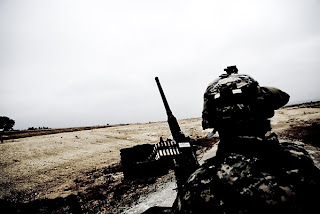 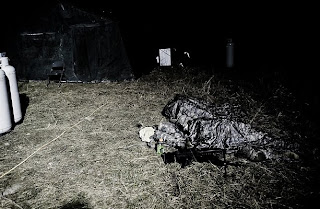 Posted by The Exodus at 7:37 PM No comments: